Launching of EuroPrideHouse on 11 June in Paris

Only two days to go until EURO 2016 starts - only three days until EuroPrideHouse 2016 will be opened in the fanzone at the Eiffel Tower. Love football and hate homphobia! 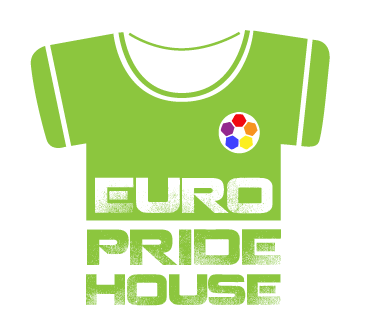 Launching of PrideHouse will start at 5pm at the Paris Pavillon in the offical Fanzone at the Eiffel Tower. The whole day (2pm-8pm) there will be programme to raise awareness on homophobia and LGBTIS in sport. Together with "Paris 2018" (GayGames will take place in Paris 2018) Queering Football will be there.

The EuroPrideHouse 2016 will be officialls opened at 5pm by FSGL and the Queering Football project.

Come by and inform yourself about the different activities.

Where? Paris Pavillion. Fan zone Eiffel Tower Paris
How to come there?

Registration: As it unfortunaltey is, due to security reasons, a controlled area, please register if you are planning to come to the official launch:

PS: Due to bad wheater and floodings the planned event on 9 June at the Banks of Seine unfortaunatly had to be cancelled. Sorry!

Euro Pride House is European Gay and Lesbian Sports Federation initiative that initially operated in Warsaw (Poland) at Euro 2012.  At Euro 2016, Euro Pride House will take place as a series of events in and around Paris, Nice, Lyon and Marseille. The Fans Embassies are also part of the project. These events are spaces where all fans, specifically including the lesbian, gay, bi-sexual and trans community can enjoy Euro2016 in an environment of tolerance and respect for fundamental human rights.  Thus, the aims Euro Pride House are to raise awareness of the involvement of LGBTIQ people in football as supporters and participants, and to create a dialogue amongst football's many stakeholders on homophobia and transphobia.

We represent a range of partners including fairplay-VIDC, the European Gay and Lesbian Sports Federation, Football Supporters Europe, Federation Sportive Gaie et Lesbienne, Unione Italiana Sport per Tutti and Spolint Institute in a shared project 'Queering Football - Tackling Homophobia and Promoting Anti-Discrimination around Major Sports Events'. The project is co-funded by the European Union under the Erasmus+ sports programme.