This European project fights homophobia in football and aims at establishing an inclusive football culture and anti-discrimination standards at major sport events. 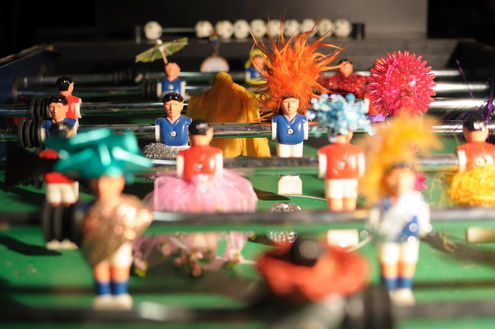 Homophobia – prejudices and violence against LGBTIQs* – is still one of the main and untackled problems in European football. Homophobic chants and physical attacks as well as ignorance and exclusion still happen on a daily basis.

With "Queering Football - Tackling Homophobia and Promoting Anti-Discrimination around Major Sport Events" (2016-2017) we want to raise awareness for a wider recognition of homophobia as a main problem and create an inclusive football and fan culture where respect is celebrated and solidarity is cherished.

Queering Football aims at using the UEFA EURO 2016 in France as a pan-European communication platform to tackle discrimination and hatred.
The anti-homophobia measures in France will serve as an example for upcoming major sport events to ensure that questions of inclusion, equality and minority rights are on the agenda. Hence, anti-discrimination activities should be a precondition if a country/city is going to host a major sport event. One main output of Queering Football is a handbook on fundamental rights and anti-discrimination standards in the context of mega sport events.

We are working together with supporters groups, grassroots initiatives, networks and local and international (football) institutions.

The partners in the European project are: European Gay and Lesbian Sport Federation (EGLSF |

www.fairplay.or.at) as the lead organization.